The Tavern of Joyful Learning. Happy 2017!

This day, at the tavern, with the drunk we sit
This day, we let go of piety, prayer and holy writ
This day, what can I say, what a feast and wine is it
This day, the cup-bearer is kind and full of wit

This day, no sign of our passage, not even one whit
This day, with the beloved I am a hit
This day, the cup-bearer does not fret a bit
This day, jugs and flowing wine and joy are closely knit

This day, from joy, night and morn cannot split
This day, own senses, hour and time cannot fit
This day, a fire, passionately we are lit
This day, this joyous feast, joy shall never quit

This day, torn from ourselves, worship of wine we admit
This day, all we ask for, be in beloved’s unit
True Light of Tabriz showed his foes the way out of the pit
This day, by divine wine, not by superstitious grit.

The “Divan” is the inspiration of Rumi’s middle-aged years. It began with his meeting Shams-i Tabriz, becoming his disciple and spiritual friend, the stress of Shams’ first disappearance, and the crisis of Shams’ final disappearance. It is believed that he continued to compose poems for the Divan long after this final crisis– during the composition of the Masnavi.
The Divan is filled with ecstatic verses in which Rumi expresses his mystical love for Shams as a symbol of his love for God. It is characteristic of Persian sufi poetry for it to be ambiguous as to whether the human beloved or the Divine Beloved (= God) is being addressed. It is also an essential feature of the particular kind of sufism Rumi practiced that mystical “annihilation in the spiritual master” [fanâ fi ‘sh-shaykh] is considered a necessary first stage before mystical “annihilation in God” [fanâ fi ‘llâh] can be attained. The Divan is filled with poems expressing this first stage in which Rumi sees Shams everywhere and in everything. Rumi’s “annihilation” of his separate self was so intense that, instead of following the tradition of including his own name in the last line of odes/ghazals, he often uses the name of his beloved spiritual master and friend instead. Or he appeals to (mystical) Silence [khâmosh] which transcends the mind and its concepts.
“Divan” [Arabic: dîwân; pronounced “dîvân” in Persian] means the “collected works” of a poet. It has been published with a variety of titles: “Dîvan-i Kabîr,” “Dîvân-i Shams-i Tabrîzî ,” “Kulliyât-i Shams,” “Kulliyât-i Shams-i Tabrîzî.” 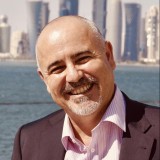